Because of a limited visa (7am-3pm, within Metro), I decided to re-visit Kapitan Larry's pond. It's near and it's can cure the itch. I know that the Barras became a rarity after the flood but I was hoping there are still a few left and I was hoping I can coax them to bite. Anyway, if the Barras are nowhere to be found, I was certain the Haruans are still there.

True enough, while waiting for the banca to ferry us to Lawak, I got a big fat Haruan while casting at the back of the kubo-store. It was a 1.34kg and catching one was a good start. 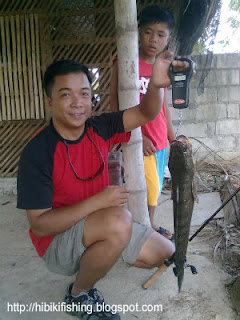 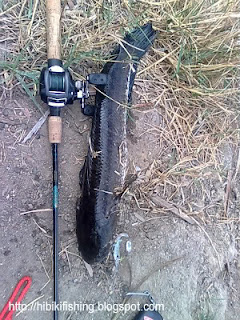 Just past noon, while waiting for the banca that will ferry us back to Kapitan's main pond, I was able to hook another. A 1.5kg. 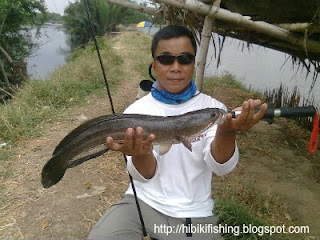 Just before going home, we saw a couple of 8kg Barramundis in Kap's net where they store live fish. They were caught by net by one of their helpers. My fishing buddy-cousin JB caught a small Barra juvenile (around 4 inches). Maybe some of the barras survived the flood and are now breeding?? Wow! this is definitely good news for us anglers.
Posted by Hibiki at 6:41 PM No comments: 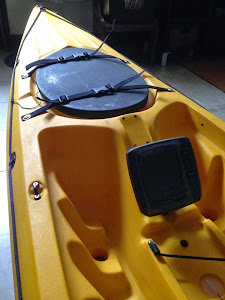